Microscopic imaging has come a long way in just a few short years, relatively speaking. It has allowed us to see and share not only close up images of several small insect species, but also images of microscopic animals that appear as if they are extraterrestrial or from a distant fantasy land.

While some are adorable, many are grotesque and a few are so ugly that you just can’t help but think that they are adorable.

I hope that you enjoy looking at this album as much as I loved putting it together! 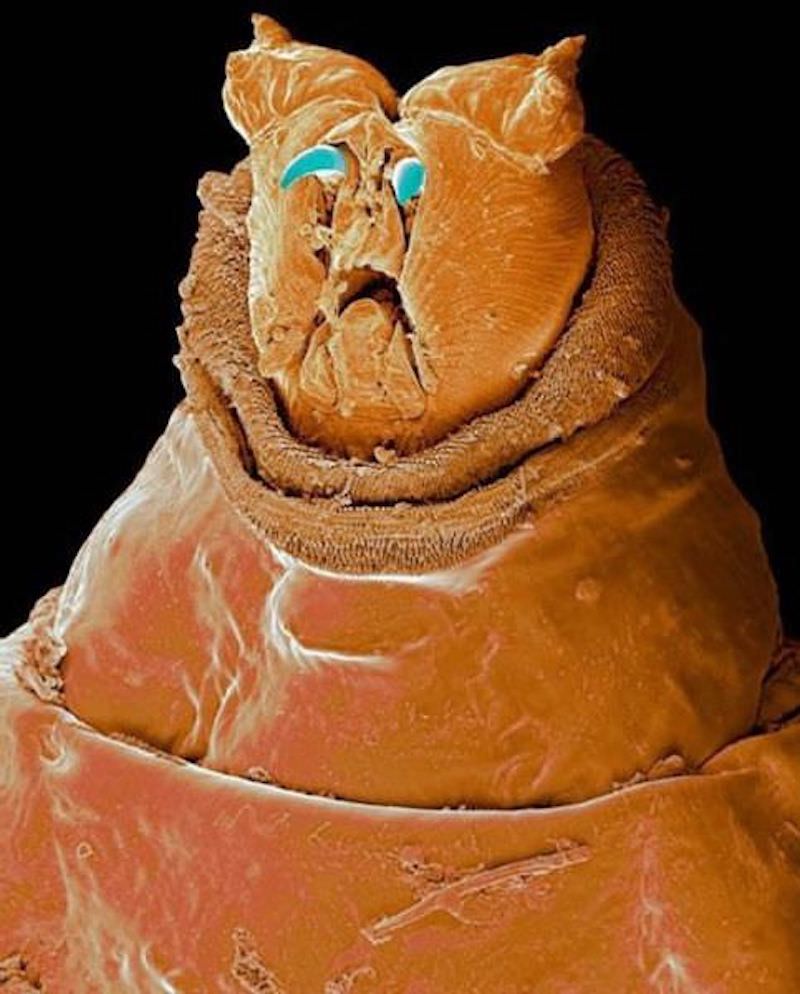 Okay, so I’m starting out with a gross one, but this image is actually pretty funny. This guy looks like he’s seen some shit. His expression is priceless. 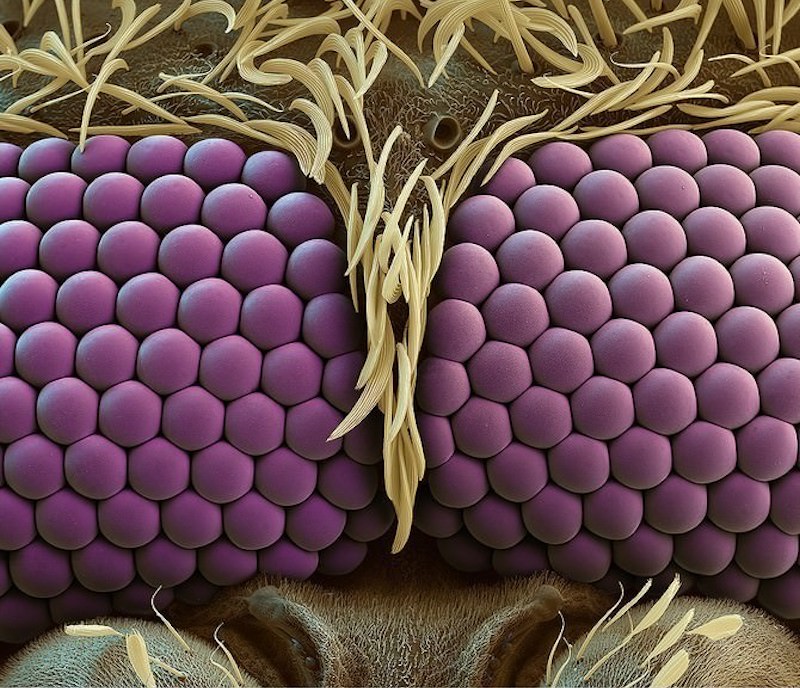 This is an image of a mosquito magnified 450X. Believe it or not, a mosquito only has 2 eyes! However, they have what are called compound eyes. This means that there are hundreds of lenses in each eye, which gives the appearance shown here.

Compound eyes are better than simple eyes (eyes that have a single lens like in humans) at detecting motion, but they are not very good at focusing and differentiating textures and shapes. 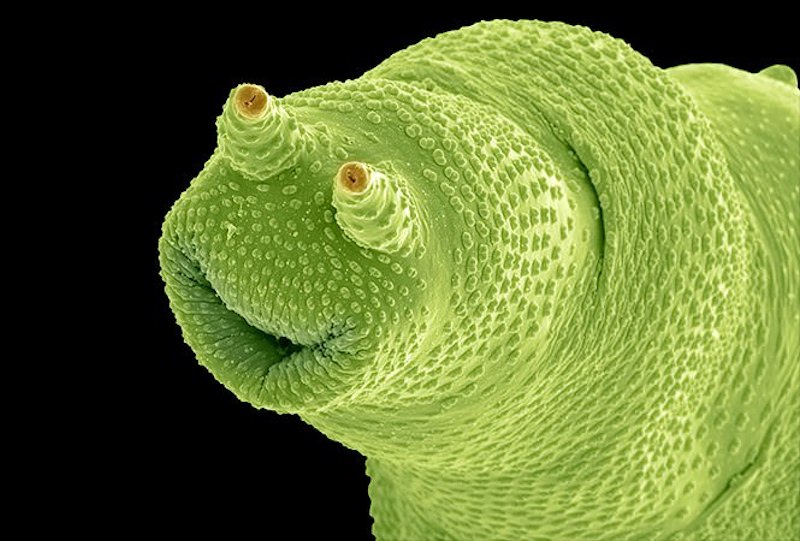 I’ve never hear if these before either. A bdelloidea is a type of freshwater zoo plankton. Such a cute little fella. There are over 450 described species of bdelloids, which can be distinguished from each other based on their morphology.

Bdelloid rotifers are microscopic organisms and are usually 150 to 700 micro meters in length (that’s 0.000015-0.000075 m, so very very small), slightly too small to be seen with the naked eye. Bdelloids can be seen with a weak magnifying lens, appearing as tiny white dots. 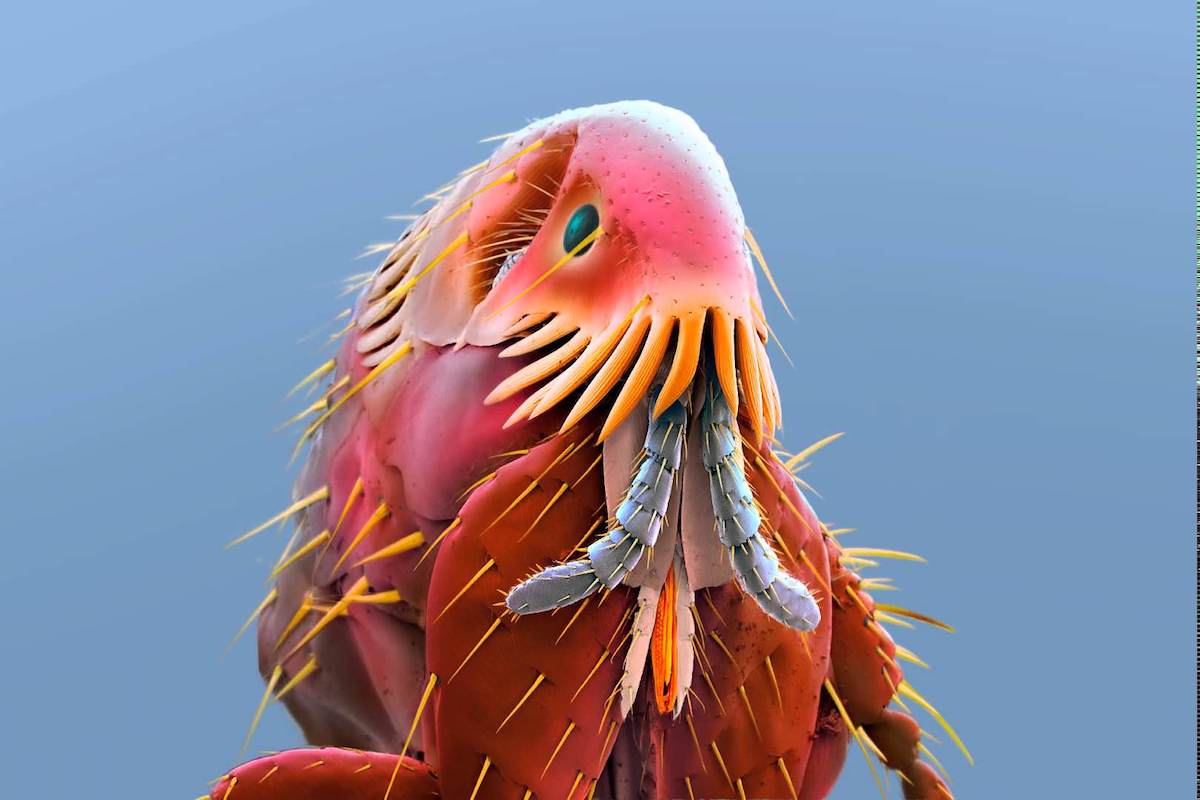 This fabulous little friend can be found on one of your best friends! That’s right, on your kitty cat (and dog too, even though they have their own species of flea). This pretty much makes them a part of your family, much like a creepy uncle. You don’t want them around, but they seem to be at all the events. And when you see them you make damn sure to eradicate them asap! 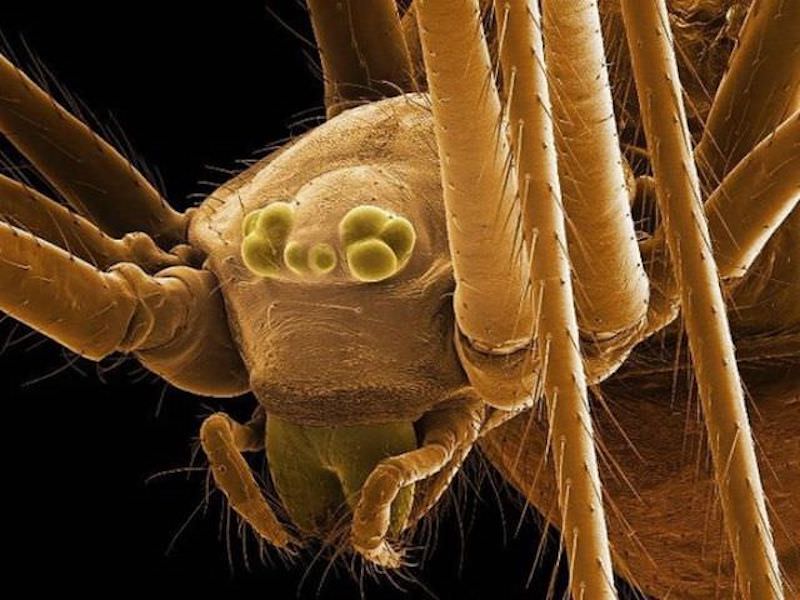 I’ve always been an arachaniphobe, but for some reason the daddy long legs don’t seem to bother me as much. I think this might have something to do with Honey I shrunk the Kids, but maybe it’s also because they are not actually spiders. In fact, daddy longlegs are more like scorpions than spiders. Daddy long legs differ from spiders as they have a different number of eyes, a different body type, different sex organs and different distinctive mechanisms.

The daddy longlegs belongs to the order Opiliones. In opilionids, the head, thorax, and abdomen are fused into one thoracic cavity. Spiders, of the order Araneae, have a distinct waist between the cephalothorax and the abdomen. Opilionids have just two eyes, compared to the usual eight in spiders. 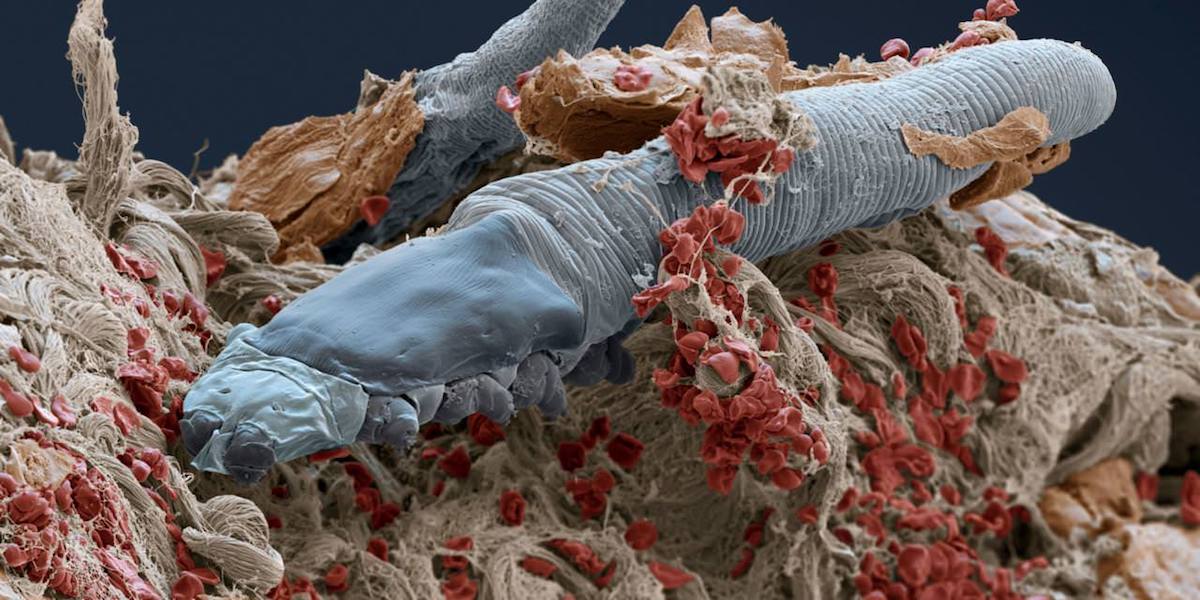 Demodex-folliculorum is just a fancy way of saying hair follicle mites. Hold on to your breath if you’re afraid of germs, because these little friends are drawing all over you! As part of your body’s microbiological biome, these mites live all over you and are found in greater numbers in the hair follicles surrounding your cheeks, nose, eyebrows and forehead.

Go ahead and wash your face, I don’t mind.

The dust mite is nearly impossible to see without magnification. A typical mattress can contain tens of thousands of dust mites and nearly 100,000 mites can live in a single square yard of carpet!

Dust mites are harmless to most people. They carry small foreign proteins, often referred to as “allergens”. They don’t carry diseases, but these proteins can cause allergic reactions in people by triggering the immune system to over react.

If you haven’t changed your bed sheets recently I would highly recommend doing so now. Those bitches are everywhere. 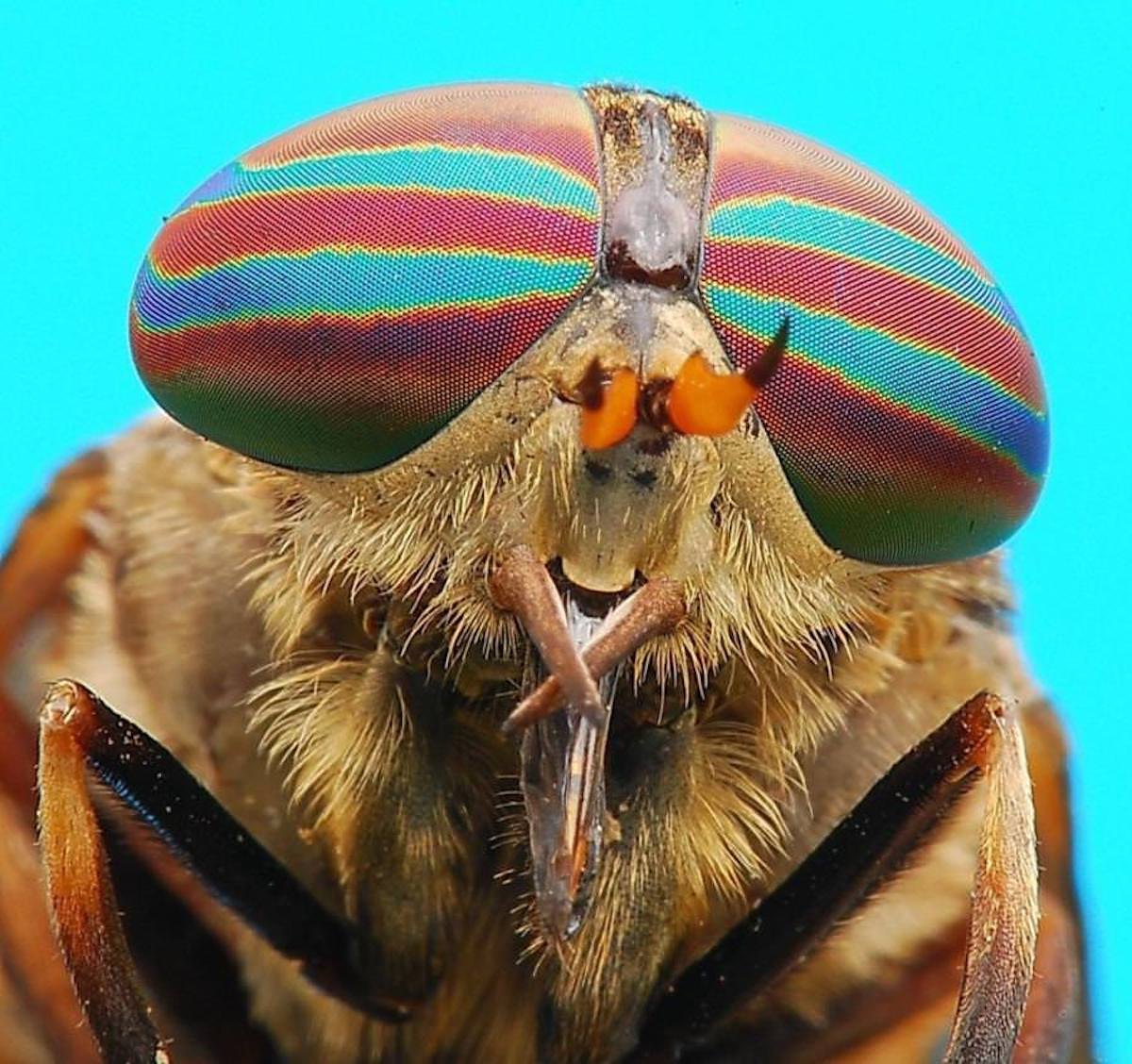 Pretty fly for a fly-guy! It could work, and this friend could be on the album cover.

But in all seriousness, incase you didn’t already know, houseflies are freaking disgusting. They literally live in shit, they are proven carriers of germs like gangrene, Typhoid, leprosy, tuberculosis, amoebic dysentery, bubonic plague, and listeria, just to name a few; and they have no mouth, instead they vomit on their food and suck it up through a fleshy straw.

Also, if you have these in your home I’d suggest a fly swatter since the female fly may lay as many as 21 batches of offspring, each containing up to 130 eggs, which hatch in about two days. 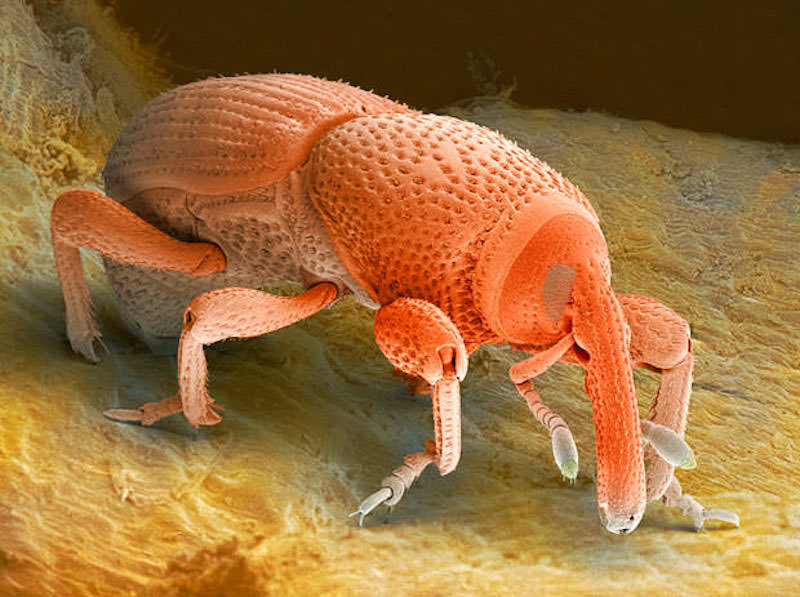 Fun fact: Weevils are actually beetles. Most belong to the family Curculionidae. There are more species in this family than in any other beetle group, over 1,000 species to be more specific.

Weevil species occur in a wide range of colors and body shapes and, depending on the species, range in size from 3 mm to 10 mm. The most distinctive feature of weevils is the shape of their head. An adult weevil has an elongated head that forms a snout. The mouth is at the end of the snout.

Weevils feed on plants and can be very destructive to crops. The grain weevil, in particular, is one of history’s most notorious pests. 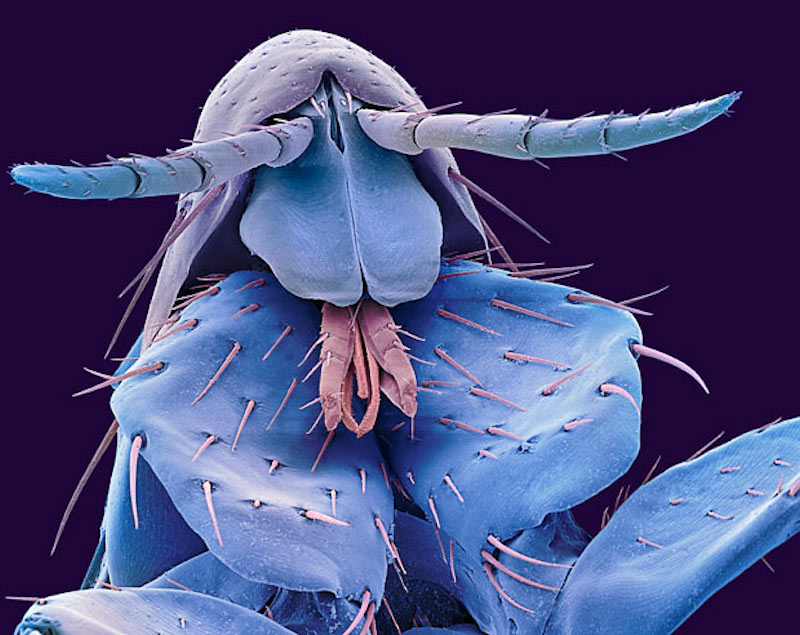 I bet you didn’t know this, but even humans have their own little flea friends. The human flea, while not very common in current domestic dwellings, has a long history of pestering us. Long ago, Chinese and others used flea traps made of ivory or bamboo which were gently warmed and placed between the sheets before going to bed, the idea being that the fleas would crawl into the traps and could then be easily killed. In the 14th – 16th centuries ladies wore fur collars, now known as flea cravats, which were supposed to catch fleas that would later be shaken out.

Nowadays when one acquires a human flea, it is usually as a result of a visit to a pigsty. The human flea breeds in profusion in pigsties, and people working in them can easily pick up large numbers and start infestations in their homes. 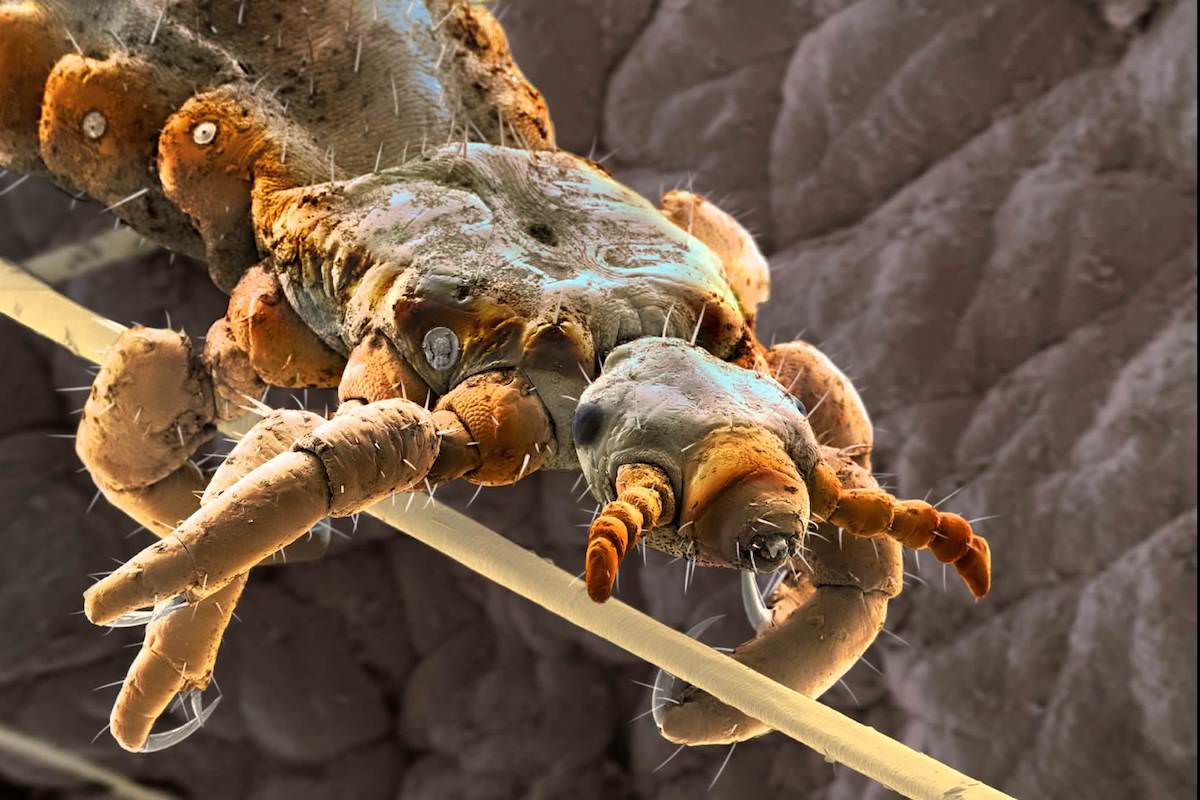 And if you weren’t already feeling itchy, this image is of another human parasite, head lice.

I had head lice once. My sister had a sleep over, and since we shared a room I was kind enough to give my bed to her friend. Well, she wasn’t so kind and about a week later both my sister and I found out that we had head lice. I was 15 at the time and had my very first date with a real boy that evening… which I had to cancel.. because I had lice. Thanks Shelby. 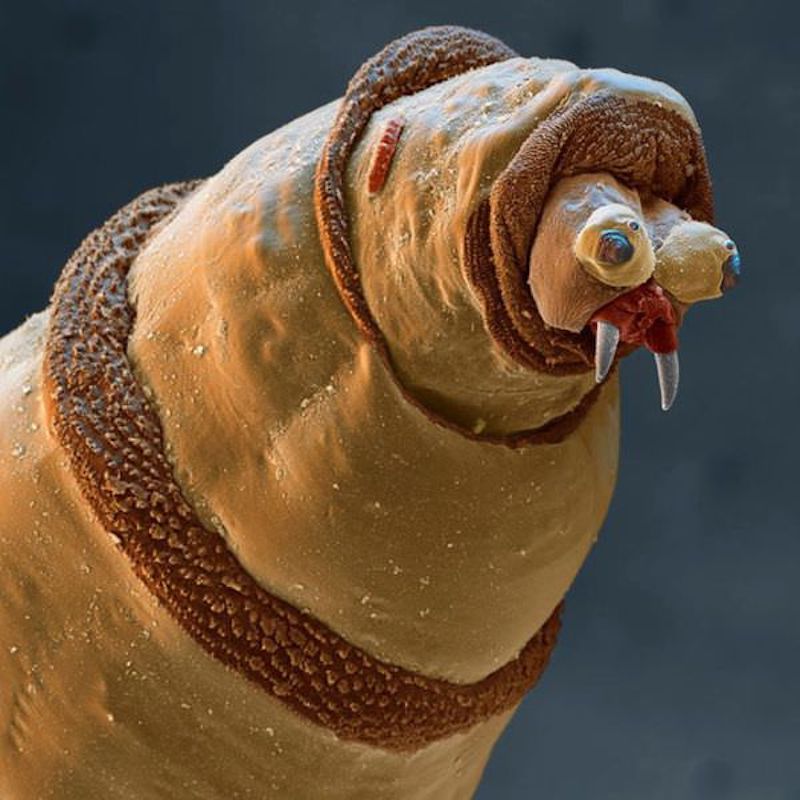 This derby little friend is another species of maggot.

Just incase this is making you even more afraid of them, it’s a fact that maggots do not bite. While those two little pokey things in the front look like a sharp pair of fangs, they are actually modified mandibles called mouthhooks. These mouth hooks help the maggot feed, as they enable them to rake in decaying flesh. Sounds delicious. 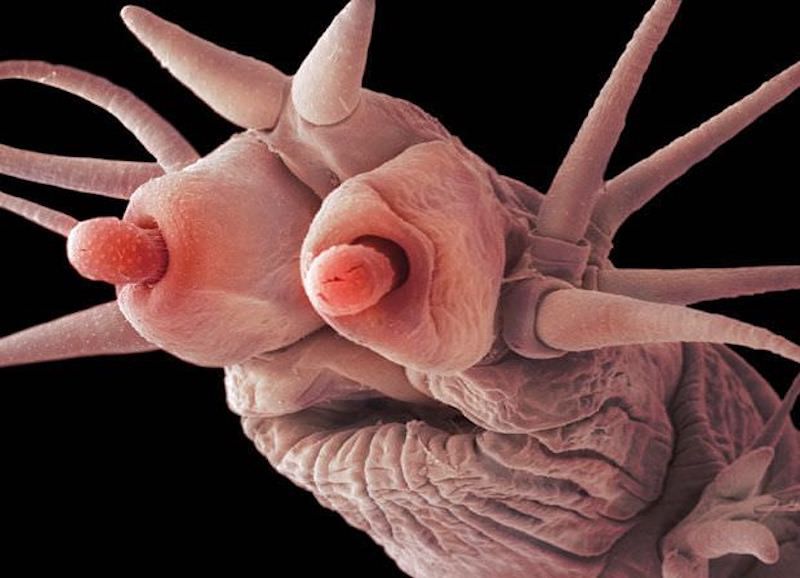 A creature from the deep a Polychaete a type of worm, a brittle worm to be more specific.

According to wikipedia, there are over 10,000 species of bristle worms. They can be found in marine environments and are living fossils, as their fossilized remains can be found in artifacts that date back to the Cambrian era.

Brittle worm bodies are made up of many segments, each with some fleshy protrusions that stand out. These ‘parapodia’ have many bristles, which are made of chitin (a type of exoskeleton). 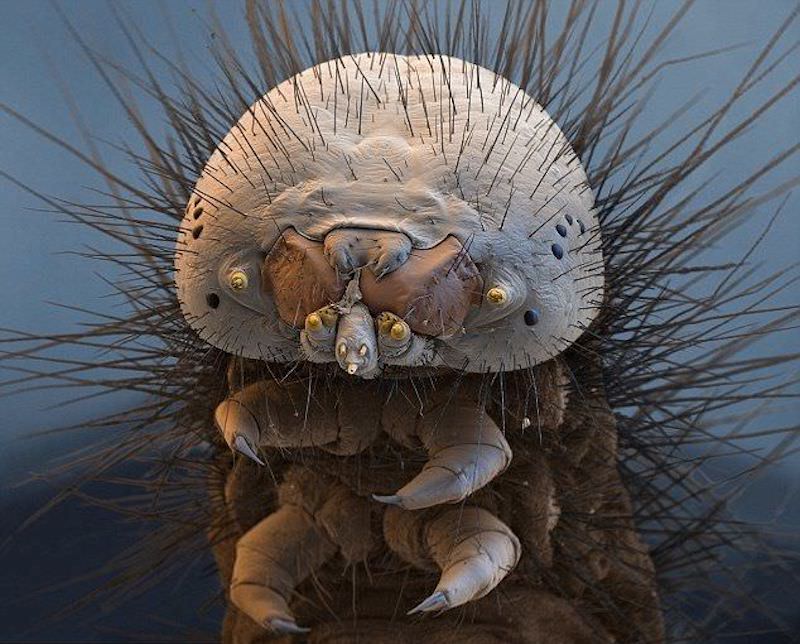 The processionary moth is one of the most destructive species to pine and cedar trees in central Asia, north Africa and southern Europe. Don’t let there fuzzy adorable appearance fool you, these caterpillars are as nasty as they look under the microscope. The hairs of the caterpillar larvae cause harmful reactions in humans and other mammals.

The species is notable for the behaviour of its caterpillars, which proceed through the woods in nose-to-tail columns, protected by their severely irritating hairs.. No thanks. 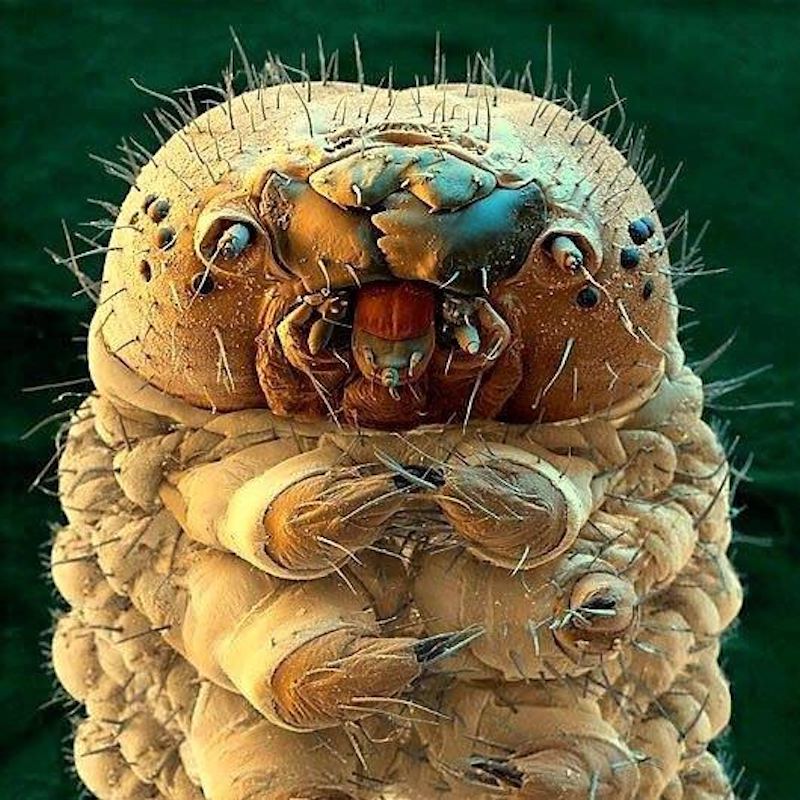 The silkworm is the larva or caterpillar of the domestic silkmoth, Bombyx mori. It is an economically important insect, being a primary producer of silk. Silkworms are only bread domestically and are dependant on humans for reproduction and survival.

And, just incase you didn’t know how silk was made, harvested and why it’s so freaking expensive, here’s a rundown of how it’s cultivated, FYI silk is not vegan:

First silk moths lay eggs, which hatch into caterpillars. After approximately 35 days the caterpillars are ready to spin their cocoon. Two glands produce liquid silk and force it through openings in the head called spinnerets. Within 2–3 days, the caterpillar spins about 1 mile of filament and is completely encased in a cocoon. The silk farmers then heat the cocoons to kill them. Harvested cocoons are then soaked in boiling water to soften silk fibers. The fibers are then unwound to produce a continuous thread. Since a single thread is too fine and fragile for commercial use, anywhere from three to ten strands are spun together to form a single thread of silk. 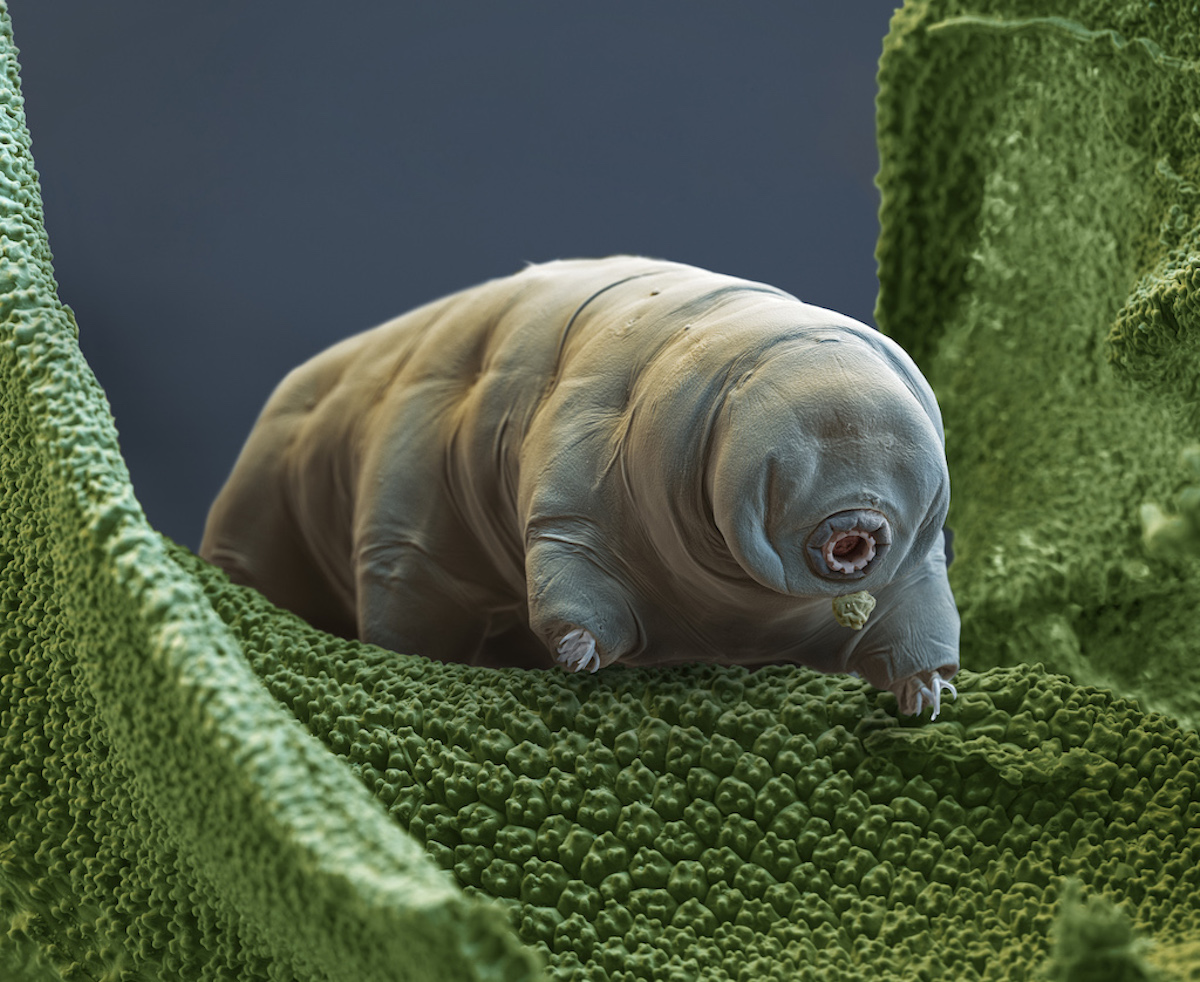 No slide show of micro babies is complete without our friendly tardigrade making an appearance. This little creature gained lots of fame on the internet for looking like a teeny tiny little bear friend.

Tardigrade are near-microscopic animals with long, plump bodies and scrunched-up heads. They have eight legs, and hands with four to eight claws on each. While strangely cute, these tiny animals are almost indestructible and can even survive in outer space. They will outlive us all. 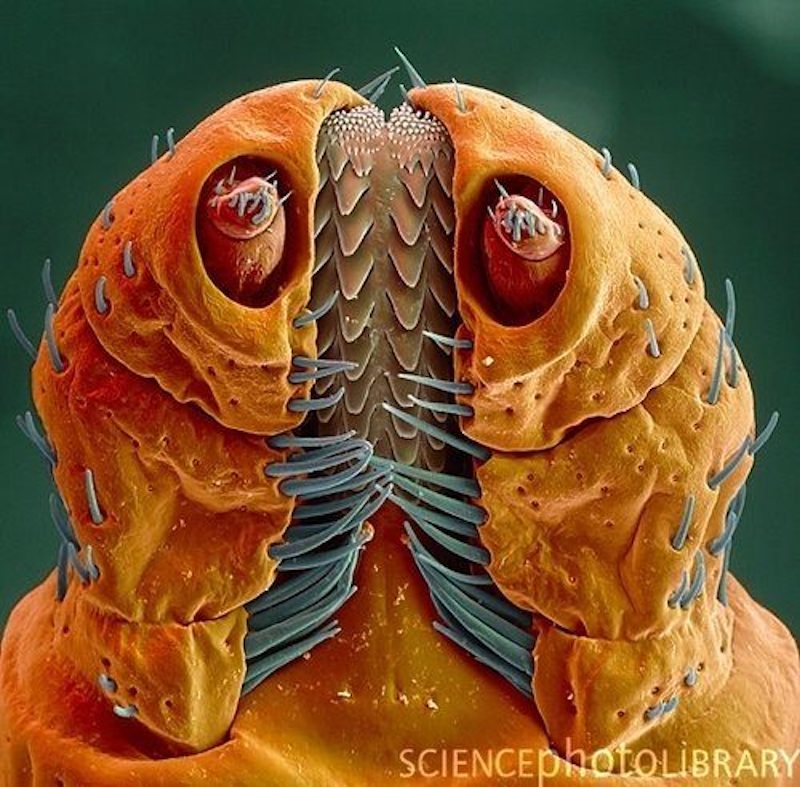 Ticks have gained a lot of media attention where I live (in the great white north) as they are becoming more rampant in the area with increasing global temperatures. So cue lots of fear mongering and many paranoid people and pet parents.

In order to survive, ticks must eat the blood of mammals, birds, reptiles or amphibians. If infected with bacteria, viruses or parasites, a biting tick poses a risk to human health. There are three species of tick; black-legged (deer), dog and lone star ticks that can transmit up to 15 diseases. However, the most dangerous is the black-legged tick, as it can potentially transmit at least five serious disease agents: babesiosis, anaplasmosis, Borrelia miyamotoi infection, Powassan virus and Lyme disease.

Peak season for ticks in June to August. Avoiding tick bites seems to be the best option, however, just staying in your backyard might not be the easiest course, as approximately 75% of people who get tick bites get them on their own property. The best defence from ticks is a good bug spray containing DEET. And if you do get bitten, remove that bitch ASAP as this is the best way to prevent disease transmission. 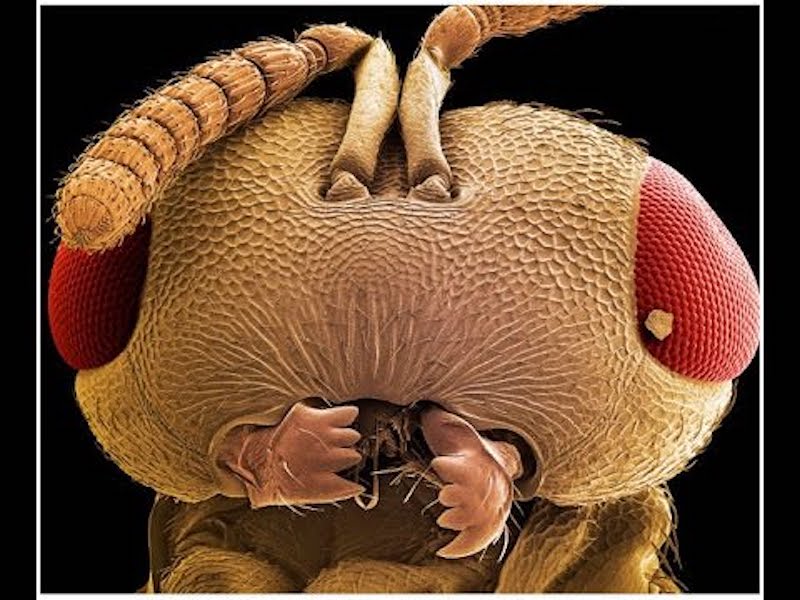 Just your friendly neighbourhood wasp, coming in to say hello. He’s even waving at you using his tiny mouth baby hands. Yes you are observing that correctly, except they aren’t actually hands. They are the wasp’s mandibles, which it uses to cut and eat food, gather wood fibres, dig nests or capture and disassemble prey. So, while they aren’t really hands, they do a lot of things that hands do. 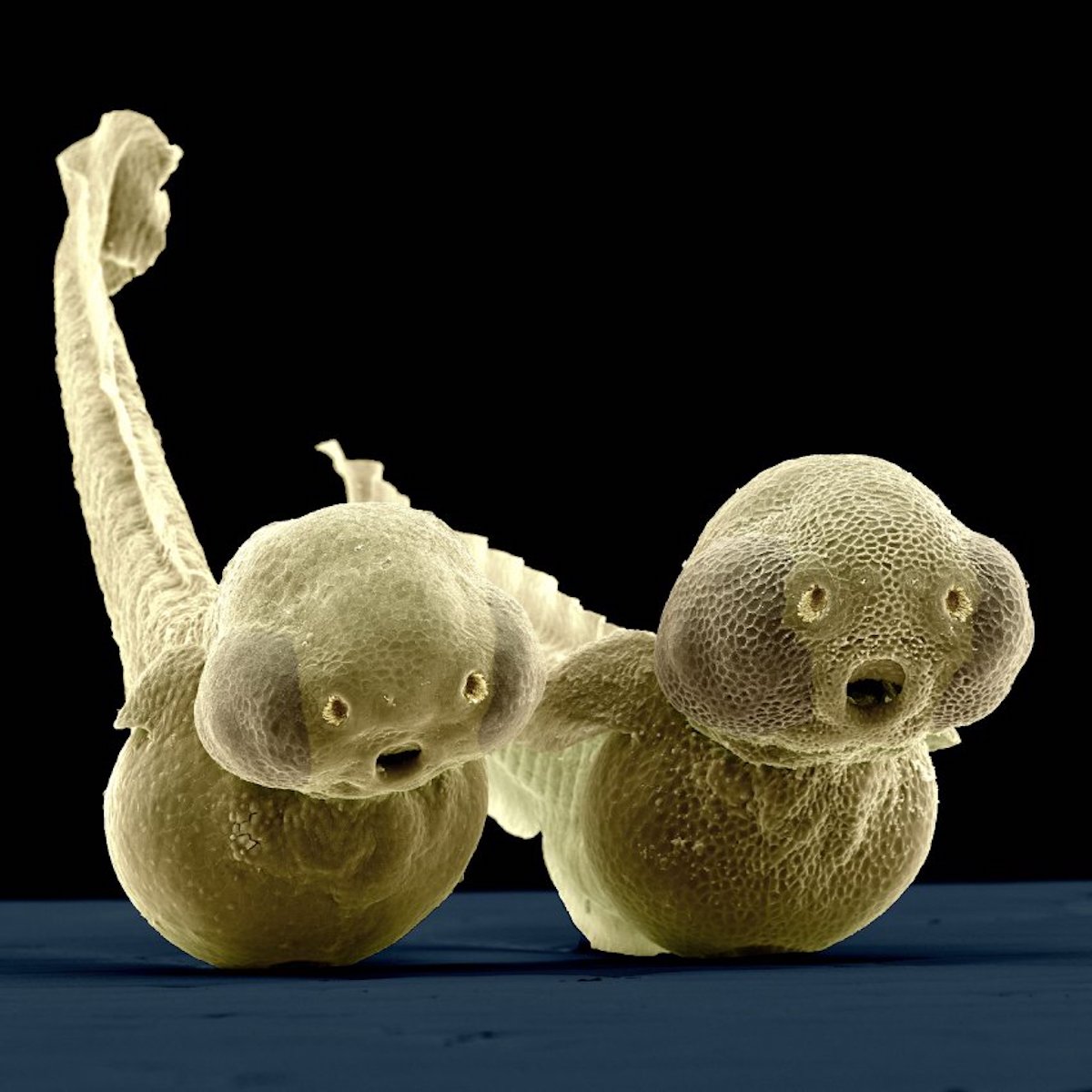 The zebrafish, or zebra danio, is a tropical fresh-water fish not only popular in aquariums around the world, but in research tanks as well. Danio rerio plays an important role in teaching us more about evolution. These two-day old larvae will turn into adult fish in three months. Scientists have found that zebrafish have the ability to regenerate fins, skins, the heart and the brain during the larval stages, and that they are also super cute! It’s a scientific fact. 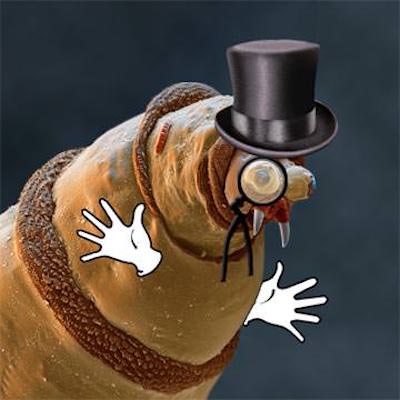 Hope you liked the show, if you’re looking for more ways to procrastinate at work check out the next post!